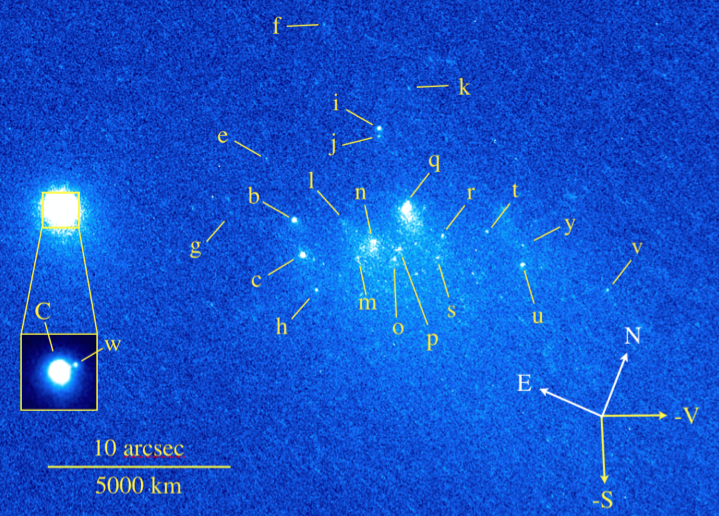 Astronomers have captured the sharpest, most detailed observations of a comet breaking apart 67 million miles from Earth, using NASA’s Hubble Space Telescope. The discovery is published online today in Astrophysical Journal Letters.In a series of images taken over three days in January 2016, Hubble revealed 25 building-size blocks made of a mixture of ice and dust that are drifting away from the comet at a leisurely pace, about the walking speed of an adult, said David Jewitt, a professor in the UCLA Department of Earth, Planetary and Space Sciences and the UCLA Department of Physics and Astronomy, who led the research team.The observations also suggest that the roughly 4.5-billion-year-old comet, named 332P/Ikeya- Murakami, or Comet 332P, may be spinning so fast that material is ejected from its surface. The resulting debris is now scattered along a 3,000-mile-long trail, larger than the width of the continental U.S.These observations provide insight into the volatile behavior of comets as they approach the sun and begin to vaporize, unleashing powerful forces.“We know that comets sometimes disintegrate, but we don’t know much about why or how,” Jewitt said. “The trouble is that it happens quickly and without warning, so we don’t have much chance to get useful data. With Hubble’s fantastic resolution, not only do we see really tiny, faint bits of the comet, but we can watch them change from day to day. That has allowed us to make the best measurements ever obtained on such an object.”The three-day observations show that the comet shards brighten and dim as icy patches on their surfaces rotate into and out of sunlight. Their shapes change too as they break apart. The icy relics comprise about four percent of the parent comet and range in size from roughly 65 feet wide to 200 feet wide. They are separating at only a few miles per hour as they orbit the sun at more than 50,000 miles per hour.

The Hubble images show that the parent comet changes brightness frequently, completing a rotation every two to four hours. A visitor to the comet would see the sun rise and set in as little as an hour, Jewitt said.

The comet is much smaller than astronomers thought, measuring only 1,600 feet across, about the length of five football fields.

Comet 332P was discovered in November 2010, after it surged in brightness and was spotted by two Japanese amateur astronomers, Kaoru Ikeya and Shigeki Murakami.

Based on the Hubble data, the research team suggests that sunlight heated up the comet’s surface, causing it to erupt jets of dust and gas. Because the nucleus is so small, these jets act like rocket engines, spinning up the comet’s rotation, Jewitt said. The faster spin rate loosened chunks of material, which are drifting off into space. The research team calculated that the comet probably shed material over a period of months, between October and December 2015.

Jewitt suggests that some of the ejected pieces have themselves fallen to bits in a kind of cascading fragmentation. “Our analysis shows that the smaller fragments are not as abundant as one might expect based on the number of bigger chunks,” he said. “This is suggestive that they’re being depleted even in the few months since they were launched from the primary body. We think these little guys have a short lifetime.”

Hubble’s sharp vision also spied a chunk of material close to the comet, which may be the first salvo of another outburst. The remnant from still another flare-up, which may have occurred in 2012, is also visible. The fragment may be as large as Comet 332P, suggesting the comet split in two. But the icy remnant wasn’t spotted until Dec. 31, 2015, by the Pan-STARRS (Panoramic Survey Telescope and Rapid Response System) telescope in Hawaii.

That discovery prompted Jewitt and colleagues to request Hubble Space Telescope time to study the comet in detail. Around the same time, astronomers worldwide began to notice a “cloud of nebulosity” near the comet, which Hubble later resolved into the 25 pieces.

“In the past, astronomers thought that comets die when they are warmed by sunlight, causing their ices to simply vaporize away,” Jewitt said. Either nothing would be left over or there would be a dead hulk of material where an active comet used to be. But it’s starting to look like fragmentation may be more important. In comet 332P we may be seeing a comet fragmenting itself into oblivion.”

The researchers estimate that comet 332P contains enough mass to endure another 25 outbursts. “If the comet has an episode every six years, the equivalent of one orbit around the sun, then it will be gone in 150 years,” Jewitt said. “It’s just the blink of an eye, astronomically speaking. The trip to the inner solar system has doomed it.”

The icy visitor hails from the Kuiper belt, a vast swarm of objects at the outskirts of our solar system. These icy relics are the leftover building blocks from our solar system’s construction. After nearly 4.5 billion years in this icy deep freeze, chaotic gravitational perturbations from Neptune kicked comet 332P out of the Kuiper belt, Jewitt said. As the comet traveled across the

solar system, it was deflected by the planets, like a ball bouncing around in a pinball machine, until Jupiter’s gravity set its current orbit, he said.

Jewitt estimates that a comet from the Kuiper belt gets tossed into the inner solar system every 40 to 100 years.