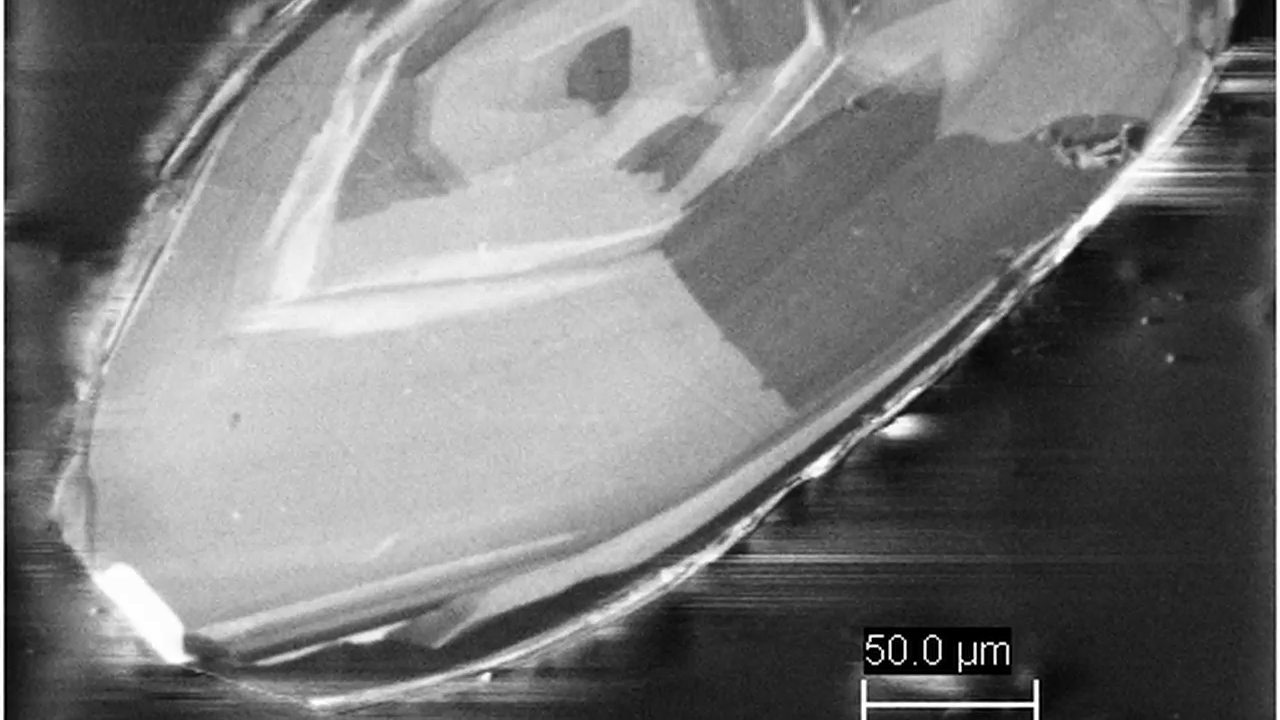 The answer to one of the great mysteries of our solar system’s history may lie within a grain no wider than a single strand of human hair.  Scientists have long known that the mineral zircon is very hardy.  “Zircon tends to stick around for a long time,” said Beth Ann Bell, a fifth-year UCLA graduate student who studies these tiny grains.  And she’s not kidding about zircon’s longevity – the samples she studies are 3.8 to 3.9 billion years old.  The Earth itself is 4.5 billion years old.

With their advisor, UCLA Professor Mark Harrison, Bell and her colleagues study individual zircon grains to better understand a critical and highly controversial event in our solar system’s history known as the Late Heavy Bombardment (LHB).  During the LHB, which occurred between 3.8 and 4.1 billion years ago, a very large number of craters formed on the surface of the Moon.  Analysis of the craters and lunar samples have led some scientists to suggest that the objects that crashed into the Moon were numerous and came from far away, possibly beyond the orbit of Jupiter.  “The whole inner solar system should have been impacted and evidence of the LHB should be detectable anywhere, even on Earth“ said Matthew Wielicki, also a fifth-year graduate student.  But scientists are still uncertain if the LHB actually happened at all.  “There is much debate among planetary scientists as to whether the lunar samples from NASA’s Apollo mission are giving us the full picture of what was happening at that time,” said Wielicki.

To better understand the LHB, Wielicki and Bell analyze zircons on Earth in an attempt to determine whether any of the objects that formed the Moon’s craters also impacted our planet.  Like tiny little clocks, zircons can record the timing of an impact event by the heat signatures it leaves behind.  Some recorded features, known as shock features, are diagnostic of an impact and can cause a grain to appear as though it was shattered.  However, such telltale signs do not always develop, and scientists must instead investigate subtler signs, like the ratios of radioactive elements inside the zircon.

To study element ratios within their zircon grains, Bell and Wielicki use a unique device called a Secondary Ion Mass Spectrometer (SIMS), located at UCLA. “With many techniques you must pulverize your sample, essentially destroying it, in order to study it,” said Bell. With the SIMS, samples are left intact and shot with a beam of energized atoms, or ions, and analyzed in tiny patches.  The SIMS can peer into a grain “one atomic layer at a time,” allowing them to study multiple heating events in a single zircon, said Wielicki.

Cosmic impacts aren’t the only events in Earth’s history that could produce heat signatures in zircon grains.  Using the SIMS, Bell and Wielicki hope to be able to distinguish between zircon grains that have been affected by a meteor impact and those that have been heated by “some other event, like mountain building or volcanism, all which were occurring on Earth during the LHB timeframe.”

Because of efficient weathering and erosion processes, there are no impact craters on Earth which date back to the LHB, so Wielicki works to develop the tools necessary to understand impact-heated zircon grains using zircons from more recent impact events.  Bell then tests the validity of those tools on LHB-age zircons whose history is unknown. “The rocks where we find ancient samples are sedimentary, which means they were once older rocks that eroded, and then turned into the sandstone we see today,” said Bell, “we don’t know what types of rock they originally grew in.”

“We are cornering two parts of a three-fold approach to pin down the LHB,” said Wielicki. The third piece of their approach involves studying zircons from other inner solar system objects. “The real excitement comes when we apply our analytical tools to samples from objects like Vesta,” said Wielicki.  Vesta, the target of NASA’s Dawn mission, is a large asteroid located in the inner solar system that has been cold for a very long time.  Wielicki said, “If we see any heating signal in Vesta’s zircons, we know it must be from an impact.”

For Bell and Wielicki, the picture is far from complete. The LHB, which occurred just before the onset of life on Earth, could have ties to the origins of life.  It is unclear, however, if impacts would have acted as “life frustrators,” slowing life’s development, or if they actually delivered the “building blocks” for life, said Wielicki.  “Understanding the timing of the LHB may help answer some of the questions about life on Earth, but first we need a better understanding of the impact history for the inner solar system,” he said.