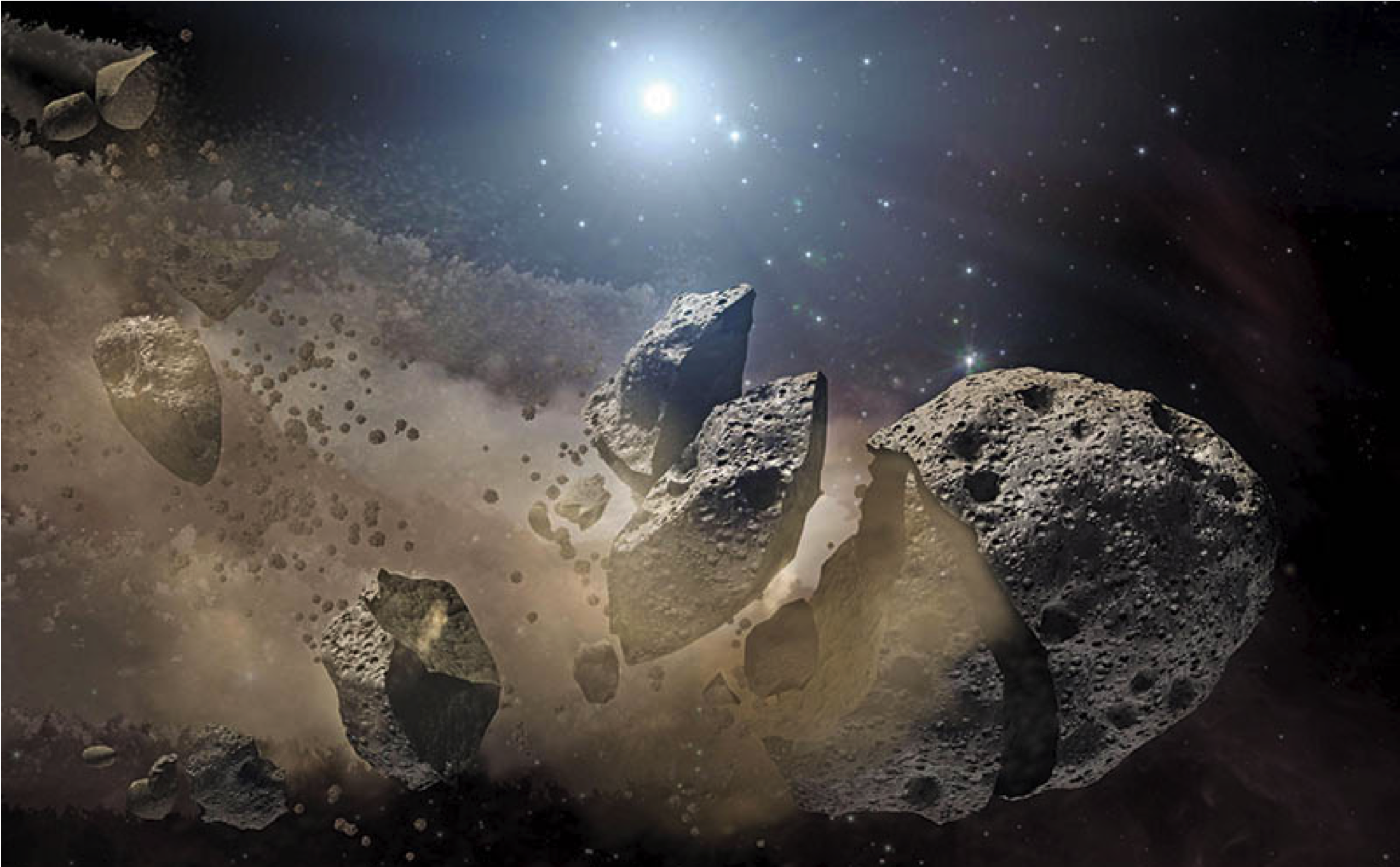 When a Sun-like star reaches the end of its lifetime, it blows off its outer layers in a sustained stellar windstorm, leaving behind an Earth-sized, ultra-dense “white dwarf” star.  Astronomers thought they knew what to expect from these celestial leftovers, but were puzzled over a decade ago when they found that a large fraction of observed white dwarfs emit more infrared light than predicted.  Most white dwarf stars are composed of hydrogen and helium, but spectral measurements of some stars revealed puzzling signals from heavier elements such as calcium.

To UCLA Professor Michael Jura, the presence of additional elements indicated that the stellar atmospheres of these white dwarf stars were contaminated from an outside source.  Many scientists hypothesized that the interstellar medium, a cosmic soup of stray particles inhabiting the space between stars, was responsible for this stellar pollution.  Jura thought the answer might instead lie with extrasolar asteroids.  “It was a mystery.  A number of these stars had been known for quite a few years, but nobody knew quite why they were polluted,” he said.  Jura believes that the stellar contamination occurs when an asteroid perturbed out of its normal orbit plummets towards its parent star and is violently ripped to shreds by gravitational forces.  Starlight from the white dwarf is consequently absorbed by the newly created disk of dust and debris left over from the shattered asteroid.  The dusty ring encircling the star re-radiates the starlight as infrared light that is invisible to the human eye but can be measured by specialized telescopes on Earth.

The swirling cloud made from atomized asteroids does more than absorb light; it eventually becomes part of the star itself.  “What is particularly important is that this disk doesn’t just orbit the star, but that it slowly accretes onto the star,” said Jura.  Bits of asteroid falling into the white dwarf star contaminate the stellar atmosphere with heavier elements that wouldn’t ordinarily be present.  “Because we have these dust disks which are broken-up asteroids, we have a tool for measuring the elemental composition of extrasolar asteroids,” he said.

To figure out what these asteroids were made of before they were destroyed, Jura and his graduate student Siyi Xu use data taken from the Hubble and Spitzer space telescopes.  They also observe using the Keck telescopes on the big island of Hawaii a few nights every year.  So far, they have detected 19 different elements heavier than helium in their white dwarf measurements.

“We find the compositions of extrasolar asteroids are quite similar to meteorites in our own solar system. For one particular star, GD 362, the best match is mesosiderite, a type of stony-iron meteorite,” said Xu.  Oddly enough, Xu is able to measure traces of certain elements in meteorites vaporized by distant stars more easily than scientists studying intact meteorites in their labs.  “It is very hard to measure the bulk composition of a meteorite in a lab without destroying it completely,” Xu said.  “Since the asteroid is already broken up for us, we can measure all of the abundances and make a comparison.”

Determining the composition of extrasolar asteroids may help scientists understand how Earth-like exoplanets around stars are formed.  “We picture that when rocky planets form, they build up from nearby chunks of orbiting rock and debris,” Jura said.  “In our own solar system, that process was somewhat inefficient, so we have asteroids left over.”  Our solar system is one of many planetary systems with surplus building blocks left behind from planet formation; scientists estimate that nearly 30% of white dwarf star systems have extrasolar asteroid populations.

Previously, astronomers have only been able to guess the composition of asteroids in other star systems based on what they have learned about asteroids closer to home.  “We think they are probably the original suite of asteroids that formed when the star was forming planets,” Jura said.  “It’s just plain fun to think that you can actually figure out what these other planetary systems are made out of.”