Over two dozen scientists from thirteen different institutions and four countries visited UCLA June 26-28, 2013 for a hands-on workshop entitled “Connecting Theory to Experiments in Geophysical and Astrophysical Fluid Dynamics (GAFD).”  The three-day interdisciplinary workshop, sponsored by the UCLA Institute for Planets and Exoplanets (iPLEX) and Professor Jonathan Aurnou’s SPINLab, brought theorists and experimentalists together to discuss how to integrate their respective techniques and answer key questions in the field of fluid dynamics.

Researchers discussed fluid flow in oceans, atmospheres, and the metallic cores of planets.  These topics have applications ranging from weather and climate on Earth and other planets to magnetism in planets and stars.

Research at the SPINLab was recently featured in the annual iPLEX magazine.  Read the story here. 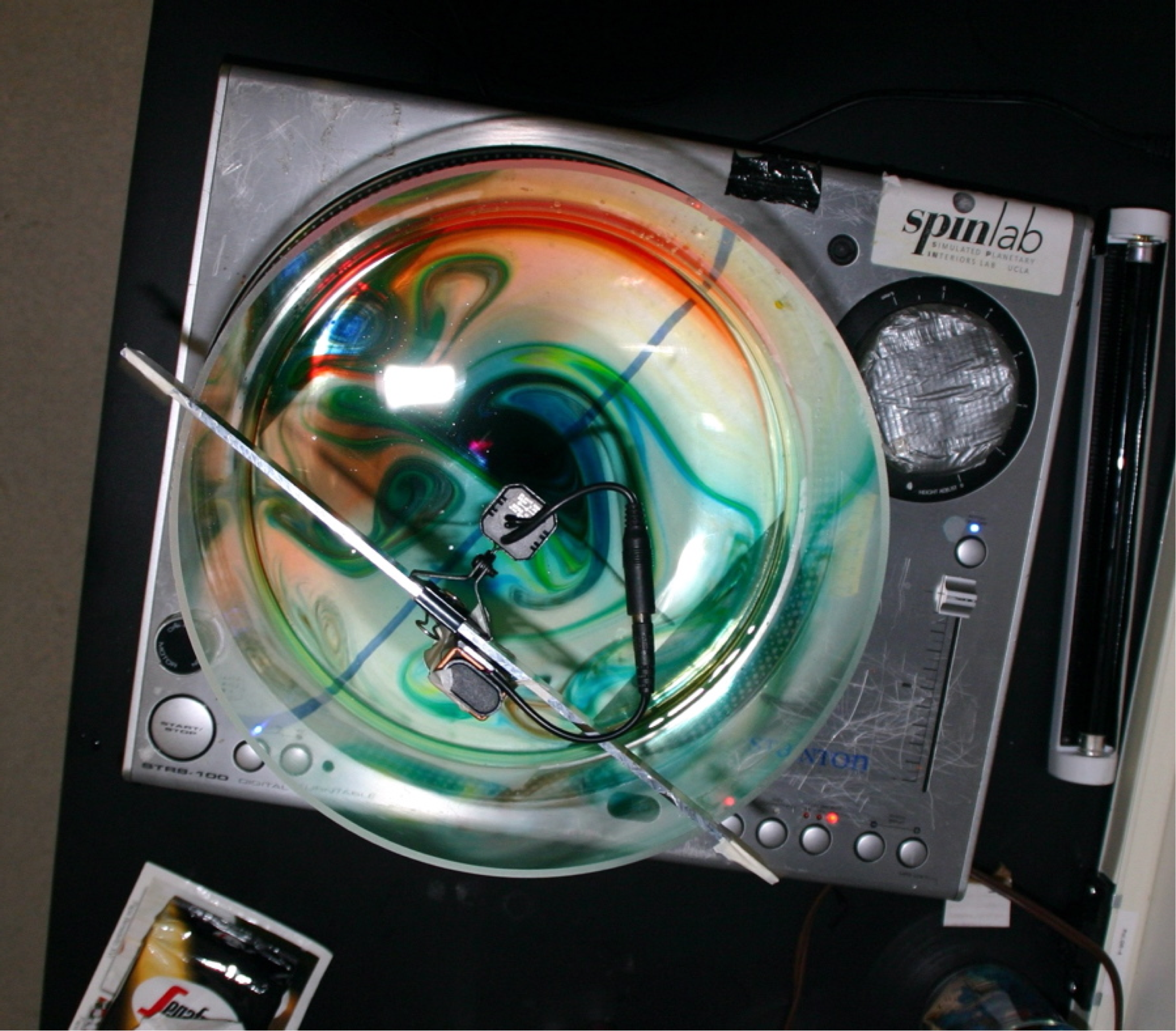 The Simulated Planetary Interiors Laboratory, known more fondly as the SPINLab, is a state-of-the-art fluid dynamics research facility among only a handful of such unique labs in the world.  Funded by the National Science Foundation, the group is led by Associate Professor Jonathan Aurnou, who has dedicated over ten years of his life to building functional models of planetary cores and atmospheres.

The daily routine for Jon, his graduate students, post-doctoral scholars and researchers involves spinning large, heat-driven containers of water or liquid metal in order to understand the fundamental physics of rotating bodies.  “We are interested in explaining how strongly turbulent systems, like planetary cores and planetary atmospheres, organize into planetary-scale magnetic fields, jet systems, and vortices,” said Aurnou.

The primary device used in the lab, a rotating magnetic convection device (RoMag), is a fluid-filled cylinder that to Aurnou represents “a parcel of fluid inside a planetary core.” “The idea is to study all the ingredients that are involved in planetary core convection and dynamo generation in their simplified state,” said Jonathan Cheng, a fourth-year graduate student with Aurnou.  Dynamos, large-scale magnetic fields generated from the motions of an electrically conducting fluid, are known to exist within planets, stars and even galaxies.  Yet the detailed physics of these natural dynamos remain largely mysterious.

The Earth has a very organized magnetic field, created by convective motions in its rapidly rotating molten metal core, but other bodies such as Uranus and Neptune, the ice giants, and Jupiter and Neptune, the gas giants, have much “messier” dynamos, Aurnou said.  In his lab, however, Aurnou is more concerned with studying the underlying dynamics of fluid systems than reproducing these dynamos.  “I know there are dynamos. There are dynamos all over the solar system and on just about every star,” Aurnou said.  “I’m interested not so much in building a dynamo in my laboratory, but instead in building experiments that allow me to better understand the fundamental physics that underlie dynamo processes.”
And fundamentals have proved successful so far for the SPINLab.  Using RoMag, the team has been able to show drastic differences in rotating convection systems that are metal versus those that are water.  In water experiments, rapidly rotating systems become turbulent much faster than numerical models had predicted.  The interpretation is that planets with deep-water layers can easily break down into turbulent systems that create disordered dynamos, like those we see on the ice giants.

Marie-Curie fellow Michael Le Bars, has been working in the SPINLab for a year, taking part in a long-standing relationship between the lab and French researchers.  Le Bars investigates mixed systems that are partially convecting and partially layered, like those in our atmosphere, oceans, and stars.  These systems were thought to be well understood, but when Le Bars decided to ship his experiments all the way from France to Los Angeles and try rotating them in the SPINLab, the results were surprising.  “Rotation changes everything,” said Le Bars.  One interesting result was the production of “inverse cascades” that create columns of spinning fluid that cut across stratified layers similar to the Great Red Spot on Jupiter.

The fluid dynamics of most turbulent systems studied in the SPINLab are simply too complex for even the most advanced supercomputers to model or predict, but Aurnou and his team realize the importance of combining the two approaches.  They hope to build bridges between experimental and computational methods in order to determine “how to make models that better describe the examples we see in nature.”