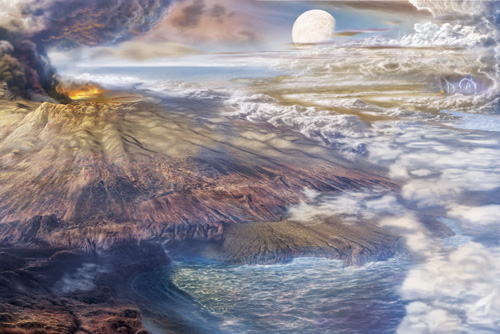 UCLA geochemist Beth Ann Bell and her colleagues have dug deep into the annals of Earth’s history and turned up the result that life may have begun much earlier than previously thought. In the study, recently published in the Proceedings of the National Academy of Sciences, they examined microscopic graphite inside tiny, ancient zircon grains from the Jack Hills in Western Australia. The graphite samples, which are made of carbon, contain information about the chemistry of the planet during the time they were formed. This chemistry, in turn, can help scientists decipher if biologic processes were at work. Although there are several processes that can form graphite, Bell and her colleagues favor the possibility that their sample formed as organic matter and was slowly incorporated into Earth’s geology through plate tectonics.

Their results suggest that life began 4.1 billion years ago, more than 300 million years earlier than previously thought. The research also suggests that early Earth was a much more hospitable environment than the typical hot, lifeless, and sterile planet that is imagined for that time period. To read more about the study, check out the UCLA Newsroom press release and Science News.