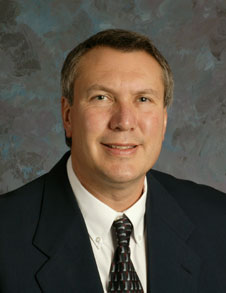 From the Sun to the Edge of the Solar System

The Sun produces a million mile per hour wind of hot ionized gas that flows out all directions in space all of the time. This solar wind interacts with the planets and other objects in the solar system and, at Earth, produces both beautiful aurora and dangerous space weather that can kill orbiting satellites. Further out, the solar wind inflates a bubble in the local interstellar medium that helps protect the entire solar system from dangerous galactic cosmic radiation. Over the past decade our knowledge of the outer reaches of this bubble – our heliosphere – have grown immeasurably with both direct sampling by the two Voyager spacecraft in these distant reaches and the first remote imaging of the global interaction by the Interstellar Boundary Explorer – IBEX. This talk tells their story.
Bio
David J. McComas is the Assistant Vice President of the Space Science and Engineering Division at the
Southwest Research Institute (SwRI) in San Antonio, Texas. He is also an Adjoint Professor at the University of Texas, San Antonio – Southwest Research Institute (PhD & MS) graduate program in Physics, which he helped to establish in 2004. From 1998 through 2000 Dr. McComas served as the founding Director of the Center for Space Science and Exploration (CSSE) at Los Alamos National Laboratory. He was concurrently the NASA Program Manager at Los Alamos and served as the Group Leader for Space and Atmospheric Sciences (NIS-1) from 1992-1998. Dr. McComas received his B.S. Degree in Physics from MIT in 1980 and Ph.D. in Geophysics and Space Physics from UCLA in 1986.
Dr. McComas is a Fellow of the American Physical Society (APS), American Geophysical Union (AGU) and the American Association for the Advancement of Science (AAAS). He has received numerous awards and accolades including the 2014 COSPAR Space Science Award, a NASA Exceptional Public Service Medal in 2015, and AGU’s James B. Macelwane Award in 1993.
Dr. McComas is the Principal Investigator for NASA’s Interstellar Boundary Explorer (IBEX) Mission, the Two Wide-Angle Imaging Neutral-Atom Spectrometers (TWINS) Explorer Mission-of-Opportunity, the Integrated Science Investigation of the Sun (ISIS) on Solar Probe Plus and the Ulysses Solar Wind Observations Over the Poles of the Sun (SWOOPS) Experiment; he is also the lead Co-Investigator for the Solar Wind Electron Proton Alpha Monitor (SWEPAM) instrument on the Advanced Composition Explorer (ACE), the solar wind analyzer for the New Horizons mission to Pluto (SWAP), and the Jovian Auroral Distributions Experiment (JADE) on the Juno spacecraft that will orbit over Jupiter’s poles. Prior to moving to SwRI, he was the Principal Investigator for DOE’s series of 10 Magnetospheric Plasma Analyzer (MPA) instruments at geosynchronous orbit. Dr. McComas is Co-Investigator on NASA’s Medium Energy Neutral Atom (MENA) instrument on the IMAGE Midsized Explorer, the plasma instrument for the Cassini mission to Saturn (CAPS), the GENESIS Discovery mission, ISTP Polar spacecraft’s Thermal Ion Dynamics Experiment (TIDE), the Cluster plasma electron instrument (PEACE), and is a team member on the New Millennium Plasma Experiment for Planetary Exploration (PEPE). Dr. McComas recently served on the NASA Advisory Council (NAC) and chaired the NAC Science Committee (NAC-SC), and has served on numerous other committees and panels for NASA, AGU, the National Academy of Science’s National Research Council, the University of California, Los Alamos National Laboratory, and the State of New Mexico. This service included chairing NASA’s Sun-Earth Connections Advisory Subcommittee (SECAS) and Solar Probe and Solar Probe Plus Science and Technology Definition Teams, as well as serving as a member of NASA’s Space Science Advisory Committee (SScAC) and on the ESA/NASA Solar Orbiter Science Definition Team.
Dr. McComas has invented a variety of instruments and missions for space applications and holds six patents. He is an author of over 500 scientific papers in the refereed literature spanning topics in heliospheric, magnetospheric, solar, and planetary science as well as space instrument and mission development. These papers have generated over 19,000 citations, with h=70, m=2.5 (h/years since PhD)
See Google Scholar profile for David J. McComas:
http://scholar.google.com/citations?user=E5K1tkAAAAJ&hl=en&oi=ao
Follow Iplex