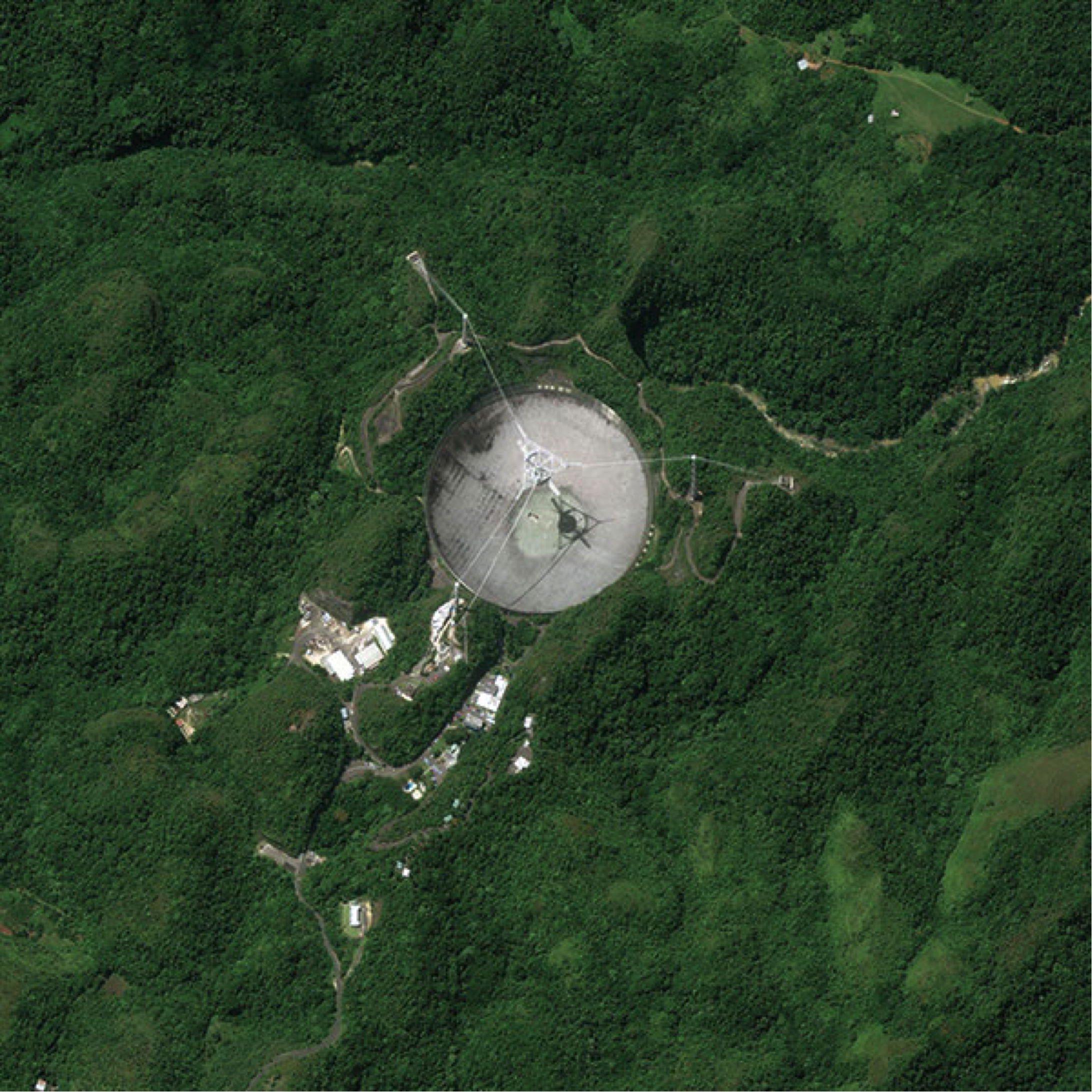 Every year, UCLA graduate student Shantanu Naidu makes a pilgrimage to Arecibo Observatory, a uniquely constructed 300-meter radio telescope on the island of Puerto Rico.  His goal: to determine the shape, spin, orbit, and other physical properties of Near Earth Asteroids (NEAs).  These large chunks of rock left over from the formation of the solar system orbit around the Sun while remaining relatively close to Earth.

Observing asteroids with radio waves is a far cry from the traditional picture of nocturnal astronomers and mountaintop telescope domes housing fragile mirrors and lenses.  Since the wavelengths they employ are far outside the visible light spectrum, radar observations can take place as easily during the day as they can at night.  Likewise, the measurements are not affected by weather because the long wavelength radio waves can easily penetrate cloud layers in Earth’s atmosphere.
Naidu bounces radio waves off his targets and examines the reflected signal to reveal the shape of asteroids that would normally appear as “unresolved points of light” through optical telescopes.  Radio telescopes can both resolve and track these elusive objects.  Radar observations taken from Arecibo over the course of a few hours contain hundreds to thousands of pixels with surface resolutions as fine as 7.5 meters.

One of Naidu’s primary goals is to determine a precise orbit for each NEA he studies. At Arecibo, Naidu can pinpoint the position of an asteroid with an uncertainty of only a few tens of meters, a remarkable feat given that the majority of these objects are more than ten million kilometers from Earth.  The precision of an asteroid’s orbit is important because NEAs occasionally come close to Earth as they orbit around the Sun.  Scientists want to be able to identify any asteroid that could be a potential hazard decades or centuries before impact. “NASA wants to catalog the orbits of as many Near Earth Asteroids as possible so we can predict if any asteroid is going to collide with the Earth and take countermeasures,” said Naidu.  Radar measurements of NEAs enable Naidu and his colleagues to derive orbits for the objects far more accurately than any other method. With a single additional observation, the time interval for reliable trajectory predictions can be improved by a factor of 5 to 10, allowing scientists to chart the position of asteroids over the course of hundreds of years rather than decades.

Radar measurements help provide advanced warning for incoming asteroids, but only a tiny fraction of NEAs are currently being studied.  Naidu and his colleagues have observed roughly four hundred of these nearby asteroids, but scientists estimate that 20,000 NEAs with diameters greater than 100 meters exist in the solar system.

When Naidu observes an asteroid for the first time using radar, he hopes to hit the jackpot and see not just one object, but two or three.  What originally appears to be a single asteroid could instead be an asteroid binary, two asteroids that orbit each other like moons orbiting a planet.  “When we observe, we see that one in every six asteroids larger than 200 meters has a moon around it, so we know that binaries form a significant portion of the NEAs,” said Naidu.  “Fifteen years ago, we didn’t even know that binaries existed.”

Fourth-year graduate student Julia Fang works to model the “orbital architecture” of these complex multi-asteroid systems.  She creates computational models to predict how radiation from the Sun or a close encounter with the gravitational field of a planet could change the orbital paths of a multi-asteroid system.  She hopes to recreate the history of these complicated systems in order to understand what processes might be responsible for producing their current orbits.  “Asteroids provide clues about the orbital history of the planets and how they evolved,” said Fang.

Both Naidu and Fang are advised by UCLA Professor Jean-Luc Margot, one of the world’s foremost experts in high-precision radar observations of asteroids.  Additional information about the UCLA radar program is available at: http://radarastronomy.org.