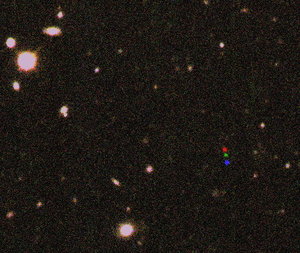 A new dwarf planet has been discovered in the ‘interplanetary no man’s land’ found between the Kuiper Belt and the Oort Cloud that astronomers originally thought was just empty space.  The new planet called 2012 VP113 is 280 miles across and orbits at a distance of 80 astronomical units  (AU),where an AU is the distance from the Earth to the Sun.  This orbit takes the new planet far beyond the Kuiper Belt which stretches between 30 and 55 AU.  Pluto, a Kuiper Belt Object, never orbits further than 49 AU from the Sun.  The dwarf planet 2012 VP113 is not far enough away to be considered part of the Oort Cloud, a shell of icy objects orbiting thousands of AU from the Sun, but its discovery may indicate the existence of an ‘inner Oort Cloud’.

Read more about the story from the LA Times, including commentary from iPLEX Director Dave Jewitt.